Home » What is general mechanical properties of powder coatings

What is general mechanical properties of powder coatings 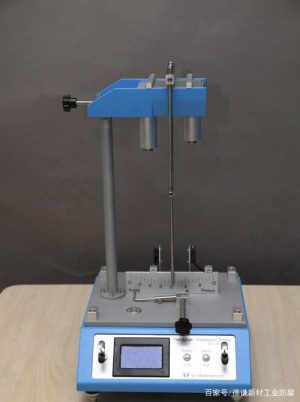 The general mechanical properties of powder coatings include the following.

According the standards ISO 2409, ASTM D3359 or DIN 53151. On the coated test panel a cross-cut (indentations in the form of a cross and parallel to each other with a mutual distance of 1 mm or 2 mm) is made on the metal. A standard tape is put on the cross-cut. The cross-cut is valued through the quantity of the detached film after removing the tape.

A coated standard test panel is folded over cylindrical rolls (according to the standards ASTM D1737, ISO 1519 or DIN 53152) or a conical mandrel (according to the standards ASTM D552 or ISO 6860). This is a measure for flexibility, stretching and adhesion of the coating under deformation. These tests are used to evaluate the post deforming capacity of coated components.

If test panels are folded around cylindrical rolls (with a known diameter) then the result is the diameter of the roll when no damage on the coating is determined.

If the test panel is folded around a conical mandrel then the test results represent to what extent the coating is cracked, beginning at the sharpest side of the fold in the surface.

According to the standards DIN 53156 or ISO1520. In this test a ball bearing with a specific diameter is pushed in the reverse side of the coating (slow deformation). This with a speed determined in advance. The coating stretches and cracks at last. The depth of the ball bearing in the test panel when the coating is cracking, is determined.

According to the standards ISO 2815 or DIN 53153. This test measures the deforming, the indentation of the coated film, when a special wheel with a sharp angle is placed on the surface during 30 seconds. The Buchholz hardness is equal to 100 divided by the length of the indentation (mm).

According to the norm ASTM D3363. In a special instrument pencils of different hardness (2H, H, F, HB, B, 2B) are placed after being sharped and flattened. A line is drawn with the pencil. After every pencil draw the coating is checked on damages.The pencil hardness represent to successive pencil hardness : one when the coating wasn’t damaged yet and the other where it was damaged.

According to the norm BS 3900:E2, ISO 1518, ASTM D5178. Is used as an indication of resistance to inkervingen. With a steel needle a line is drawn (determined speed and pressure) on the coated surface. Every time when a line is drawn with the needle a heavier mass is put on the needle. At the moment that the coating is damaged (needle on metal) the quantity of mass on the needle is the notation for the Clemen hardness.

Direct impact or indirect impact: ASTM D-2794 of ISO 6272.Impact (fast deformation) is tested with an impacttester. The principle consist on a mass that falls from different heights on the coated surface (direct : on the coating, indirect on the reverse side of the coated test panel). The impact, when the indentation in the coating represent no effect of cracking, is quoted in kg.cm, in N.m or in inch/pounds.

You will find many articles about properties of powder coatings.