What is Friction Charging (Tribostatic Charging) 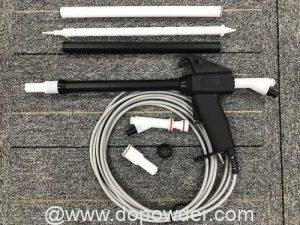 Between the friction charging spray gun and the object, as the diagram illustrates, we have present primarily:

With Tribostatic Charging, there exists no high voltage which can subsequently generate free ions or produce electric fields.

Efficient friction charging of powder particles depends on each particle being rubbed against the barrel of the spray gun. This, as a rule, can be adjusted by regulating the air flow through the gun as well as the powder/air ratio for optimum performance

Most friction spraying devices are equipped with a microamperemeter that provides an indirect measure of the powder charging process. This electrical current measurement, however, depends on the amount of powder passing through the spray gun. A high mA reading does not guarantee good coating results. The most important factor is maximizing the proportion of charged powder particles existing the spray gun.

How the friction gun works:

The powder is charged by the principle of triboelectric charging. The charge is generated by the collision, friction, contact and clutching between the powder and the special polymer material and nylon in the gun wall. The corona gun is a high-voltage corona discharge at the electrode tip.

After the powder leaves the friction gun, there is no external electric field, and the driving force is only the air force, and a weak Faraday effect is produced at the same time, making it easier for the powder to enter the area with complex geometry.